It’s been a great week at Endeavor. We had a about a half dozen extremely motivated hockey players join our off-season training groups, including Colby Cohen, who came with a bittersweet present. 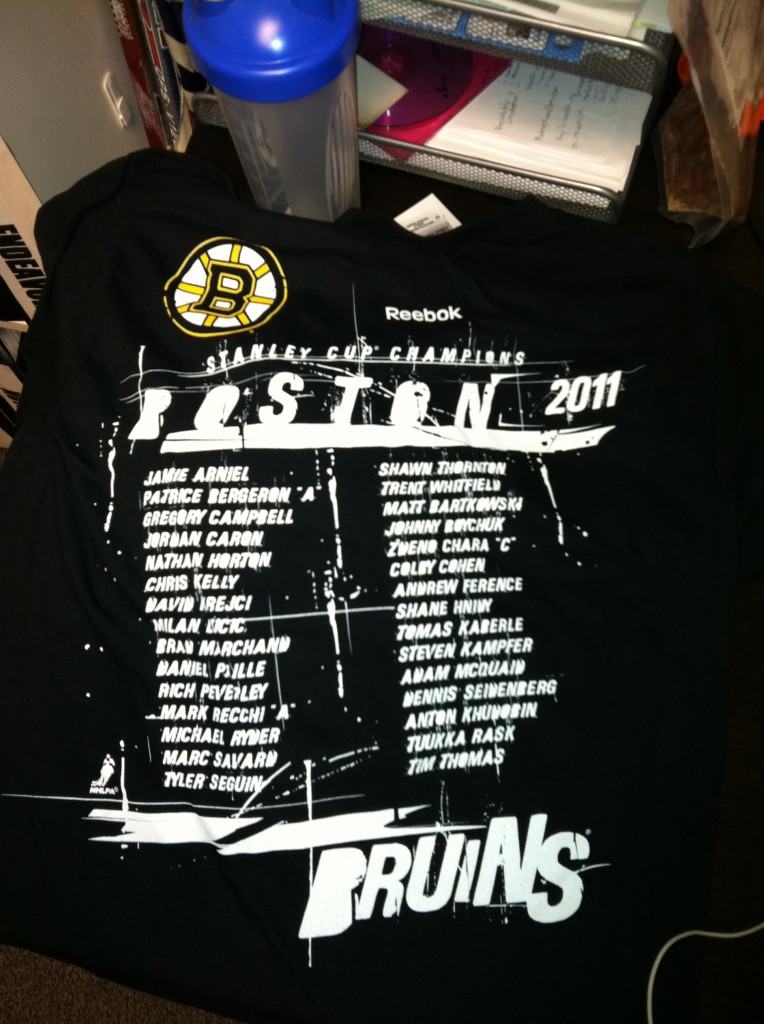 As a Flyers fan, it’s tough to have a Bruins Stanley Cup Champion t-shirt in my office, but I’m happy that Colby got to be a part of their run (6th name from the top on the right hand column).

Speaking of hockey players looking to get better, we’ve added some great content to  Hockey Strength and Conditioning that you’ll want to check out over the weekend.

My friend and long-time Carolina Hurricanes Athletic Trainer and Strength and Conditioning Coach Pete Friesen added a video interview with him on the fitness demands of hockey and highlights some of the things his athletes do in the off-season. Pete’s an awesome guy and has a ton of experience. This was a cool feature.

Darryl Nelson wrote an article on core training for hockey players. I think the major concepts in Darryl’s article are commonly accepted amongst well-educated hockey strength and conditioning coaches, I don’t think the concepts have trickled down to players, parents, and coaches yet. In other words, the information hasn’t yet reached the populations that need it most. Darryl’s article highlights an important function of the true core (not what most people define it as), and identifies why a few of the most common core exercises can actually be counterproductive. Quick read with powerful implications.

Check out the article here >> Core Training from Darryl Nelson

Check out the webinar here >> In-Season Training from Sean Skahan

The forums have had some good discussions recently too. As I said last week, because of the quality and timeliness of the training programs we post online, we’re starting to get more semi-pro hockey players signing up as members, using the programs, and posting their questions on the forums. Basically they get access to high quality programs and can have professional hockey strength coaches answer all of their individual questions. Not bad for less than $10/month! I appreciate those of you that have helped spread the word about HockeySC.com. One of the reasons I like training hockey players so much is because they’re dedicated to doing whatever it takes to get better (something Sean pointed out in his webinar…with the help of the Hanson brothers). Unfortunately, most players, parents, and coaches still aren’t aware of the resources available to them, so it’s great to have your support in spreading the word about our site.

As always, if you aren’t a member yet, I recommend trying out the site for $1 Hockey Strength and Conditioning for a week. If it’s not the best buck you’ve ever spent , I’ll personally refund you!

P.S. Just a friendly reminder that you only have a couple days left until the price jumps up significantly on Maria Mountain’s Ultimate Goalie Training 2.0. If you’re looking for a complete off-ice goalie training program, this is it!