The Myth of Core Stability

Today’s Thursday Throwback takes us back to 2010, when a controversial article questioning the benefits of “core stability” training was published. The post discusses what core stability really means, and the most effective progression we’ve found to not only minimize injury risk, but also to improve performance in athletic settings.

We still use variations of the exercises presented in the videos below. They’re incredibly challenging, which our guys really enjoy. Give them a shot the next time you’re in the gym with a partner.

The Myth of Core Stability

Because of the core’s importance in both maximizing performance and minimizing injury risk, core stabilization concepts are one of the underlying foundations of all of our training programs at Endeavor. If you’ve been following my site for a while you know that I do my best to actively seek out new information to better design programs to help our athletes. Last week I came across a draft of an article from Eyal Lederman, a professor in London, titled “The Myth of Core Stability.” I’m always intrigued by articles that argue against the norm as these are usually the most eye opening.

Lederman argued that the evidence in support of core stability training to back pain is pretty limited. He notes that strength may not be the issue since some of the major core muscles are minimally active during activities of daily living. As a quick background, muscles become “active” when the body sends an electrical signal to the muscle to contract. For study purposes, the signal is often “normalized” to a maximal value for that muscle (MVC). When we talk about these “maximal” values, we need to keep in mind that maximum activation is highly dependent upon the length of the muscle and direction of the movement, but I won’t bore you with all the underlying neuroscience.

Further research is cited painting the picture that normal activities (even some with external loads added) require minimal trunk muscle activity (between 1-5% MVC).

The underlying tone of the article was that core stability training is foolish and scientifically unsupported. I bring up this article because many times these things work their way to your eyes and ears through the media with headlines like “Core Training Is Not Important” as some staff writer attempts to create an interesting story with out-of-context research. Within an athletic context, there are a few things worth keeping in mind:

At Endeavor Sports Performance, our core training system functions to integrate appropriate mobility and stability of the pelvis and spine into athletic movements. We follow a basic progression of:

While I think most people are at least loosely familiar with the first two steps of this progression, few athletes have been exposed to perturbation training. I strongly believe this type of training will drastically increase in popularity over the next several years. Check out videos of a couple of the more advanced progressions of perturbation training  below. Have you ever seen anything like this?

Colby Cohen and Jeff Buvinow do a great demonstrating these exercises. The goal is to not move at all or, more realistically, to minimize the displacement and return to “neutral” as quickly as possible. It’s hard to tell from the video, but I’m really “cranking” on them pretty hard. We progress to more vigorous perturbations, but ultimately we want to challenge their stability in multiple directions. In the first video, I’m randomly alternating amongst pushing, pulling, and rotating the ball in a variety of directions. In the second video, I’m somewhat randomly alternating between rotating the hips, rotating the shoulder, and laterally deviating the hips and shoulders. By creating a random variety of stresses, the athlete learns to reflexively generate stiffness. 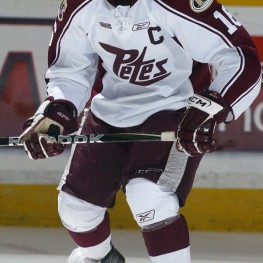