The other day I got a great question from a college intern:

I was helping out with the women’s hockey team several days ago, and they were having them do weighted pushups.  I noticed that most were barely going halfway down on the eccentric portion, and their elbows were flared almost to ninety degrees.  I suggested to their head coach that he drop the weight, as they clearly weren’t able to handle the weight, weren’t getting anything out of it, and were just putting themselves at risk for getting hurt.  He obliged and had them regress to bodyweight, but still a couple of them had trouble with proper form.  I was curious if you could recommend any regressions from BW pushups for younger athletes, inexperienced lifters, or female athletes who just can’t quite handle them.

I really like questions like this because it speaks more to the art of coaching. Also, the question is phrased in a way that demonstrates an understanding that “good” exercises can be performed in ways that make them “bad” exercises. Teaching quality movement is more than just picking good exercises; they need to be performed optimally to really gain the benefit.

Push-ups, because they require no equipment, and therefore are space and large group friendly, tend to be a go-to for youth hockey organizations. I’ve discussed the common flaws in horizontal pushing patterns before, especially as they pertain to shoulder pain. You can check out one article on that topic here: Shoulder Pain with Pressing Exercises

The truth is, most untrained female athletes and almost all youth athletes (especially ~15 and younger) can’t do a good push-up, let alone several sets of them. As a result, we’re constantly regressing the movement in any number of ways dependent upon what the major limitation may be.

The three most notable limitations we see on a regular basis are:

The images below demonstrate what each of these may look like. 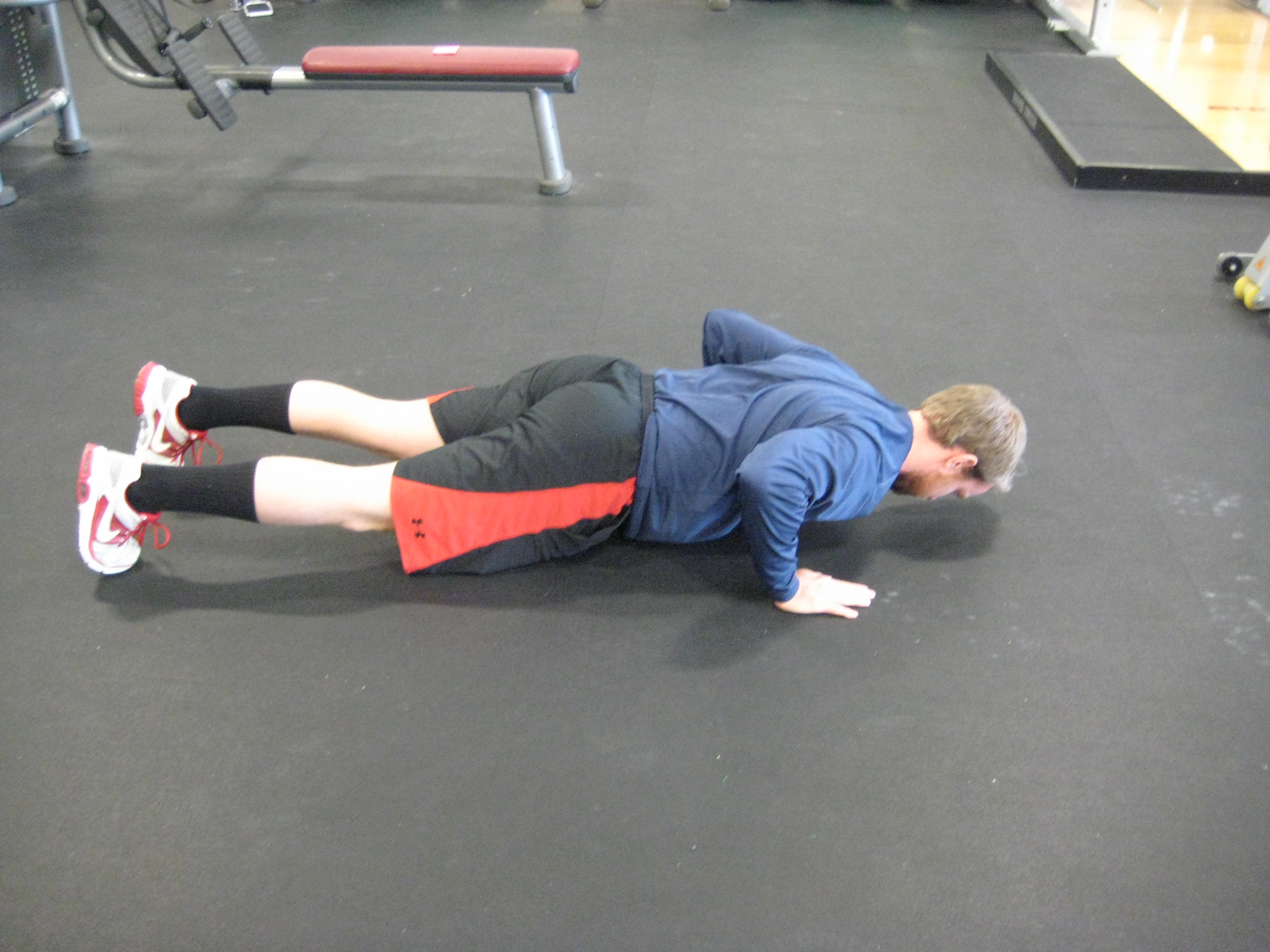 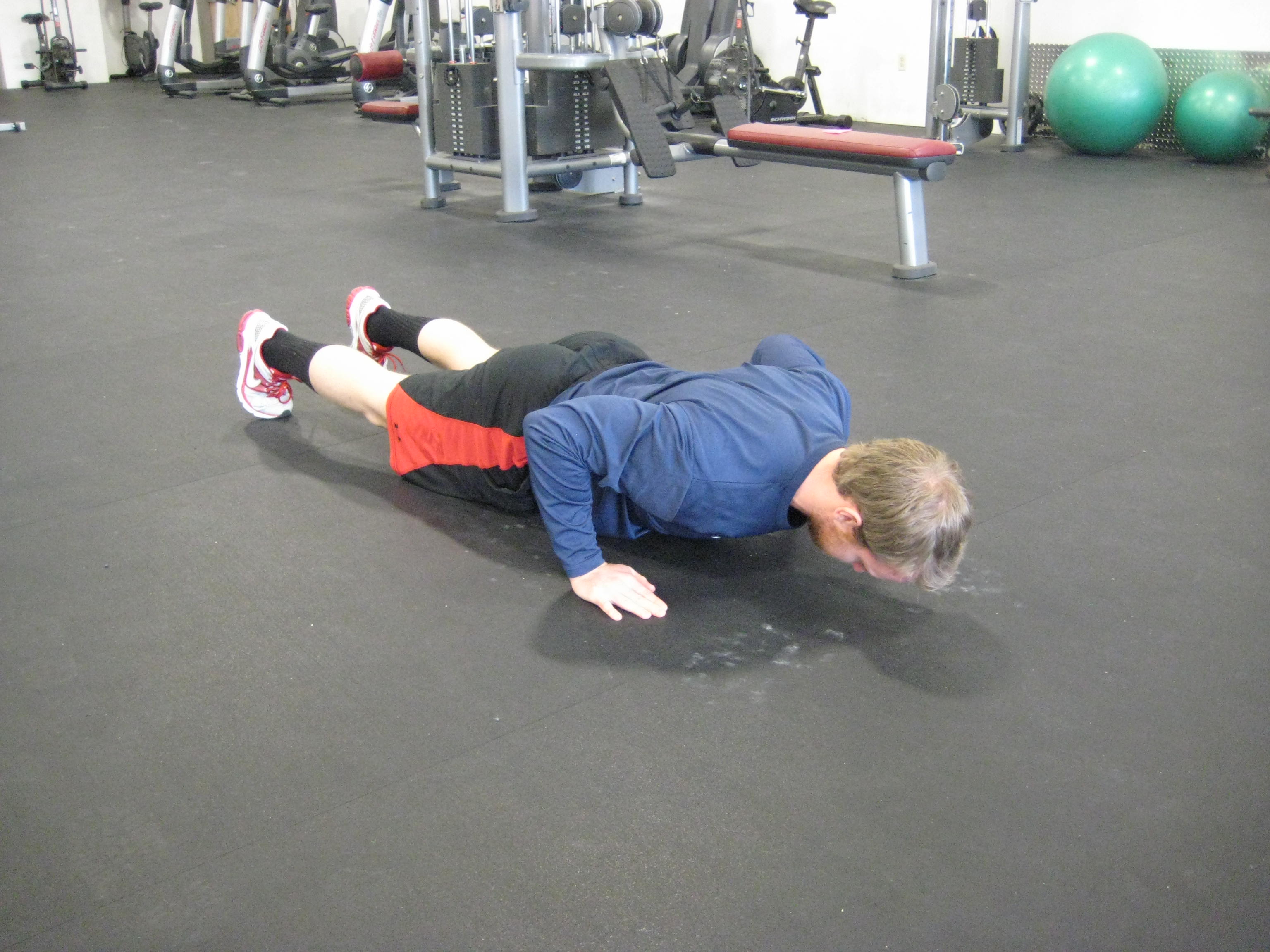 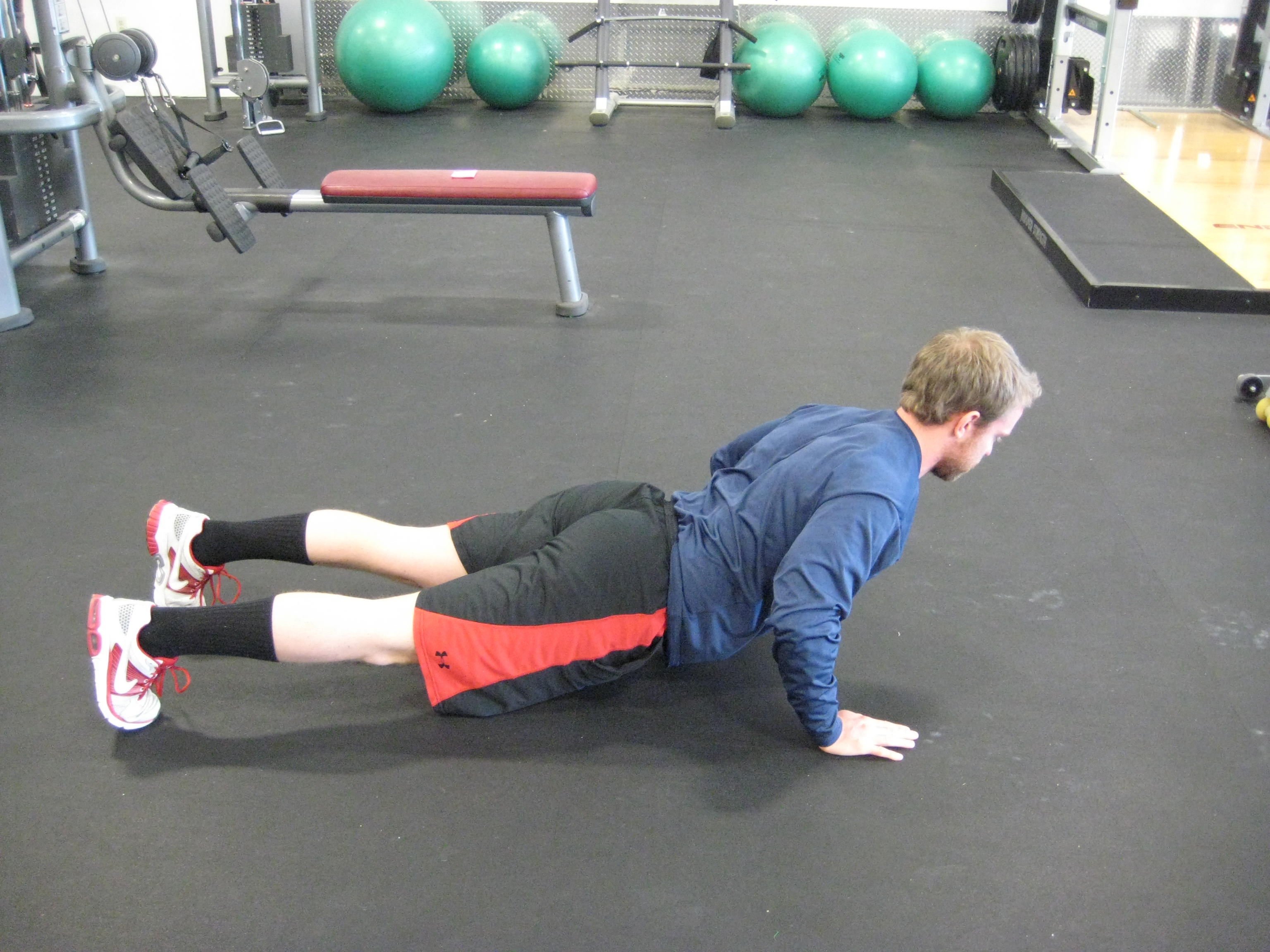 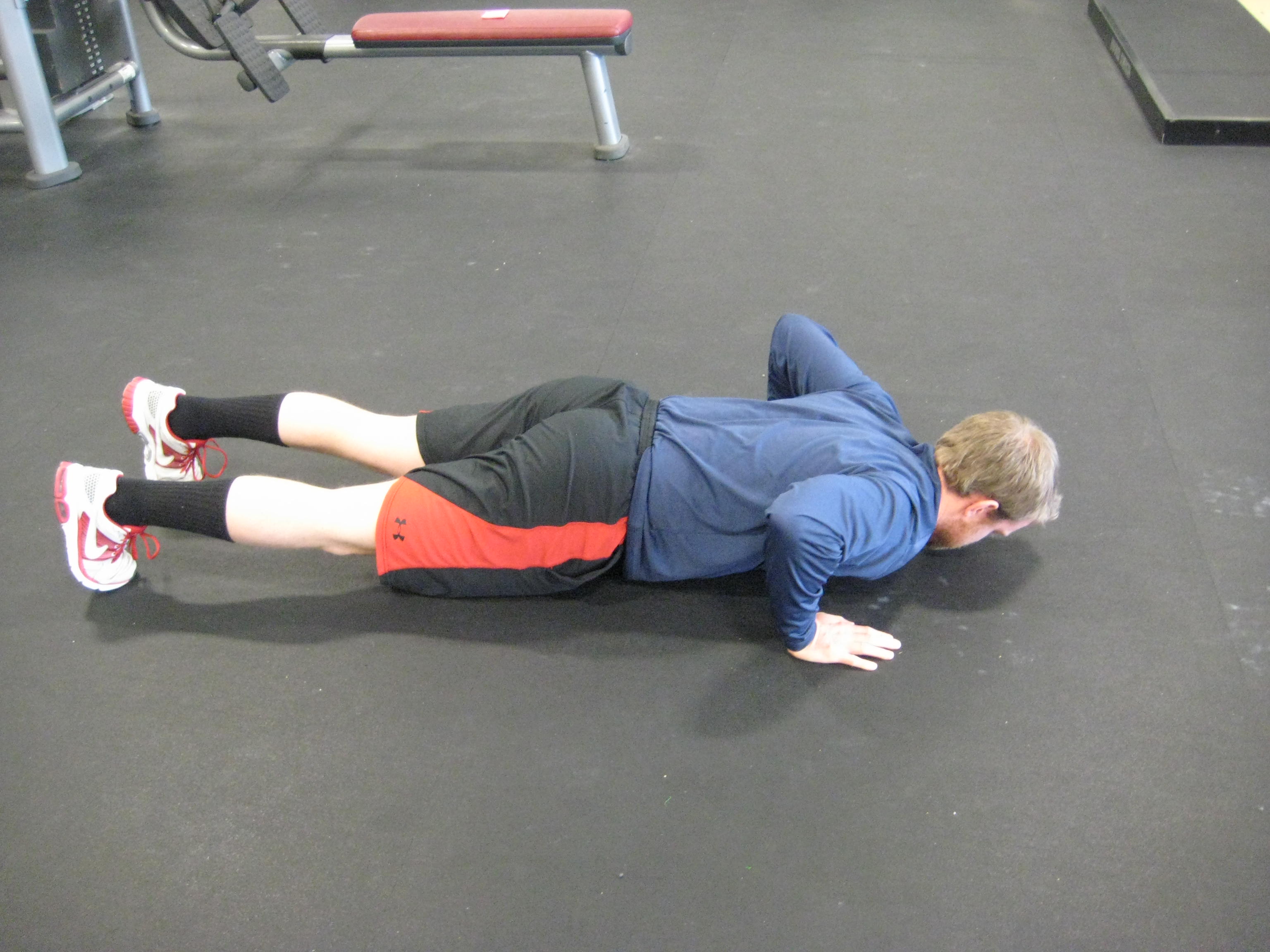 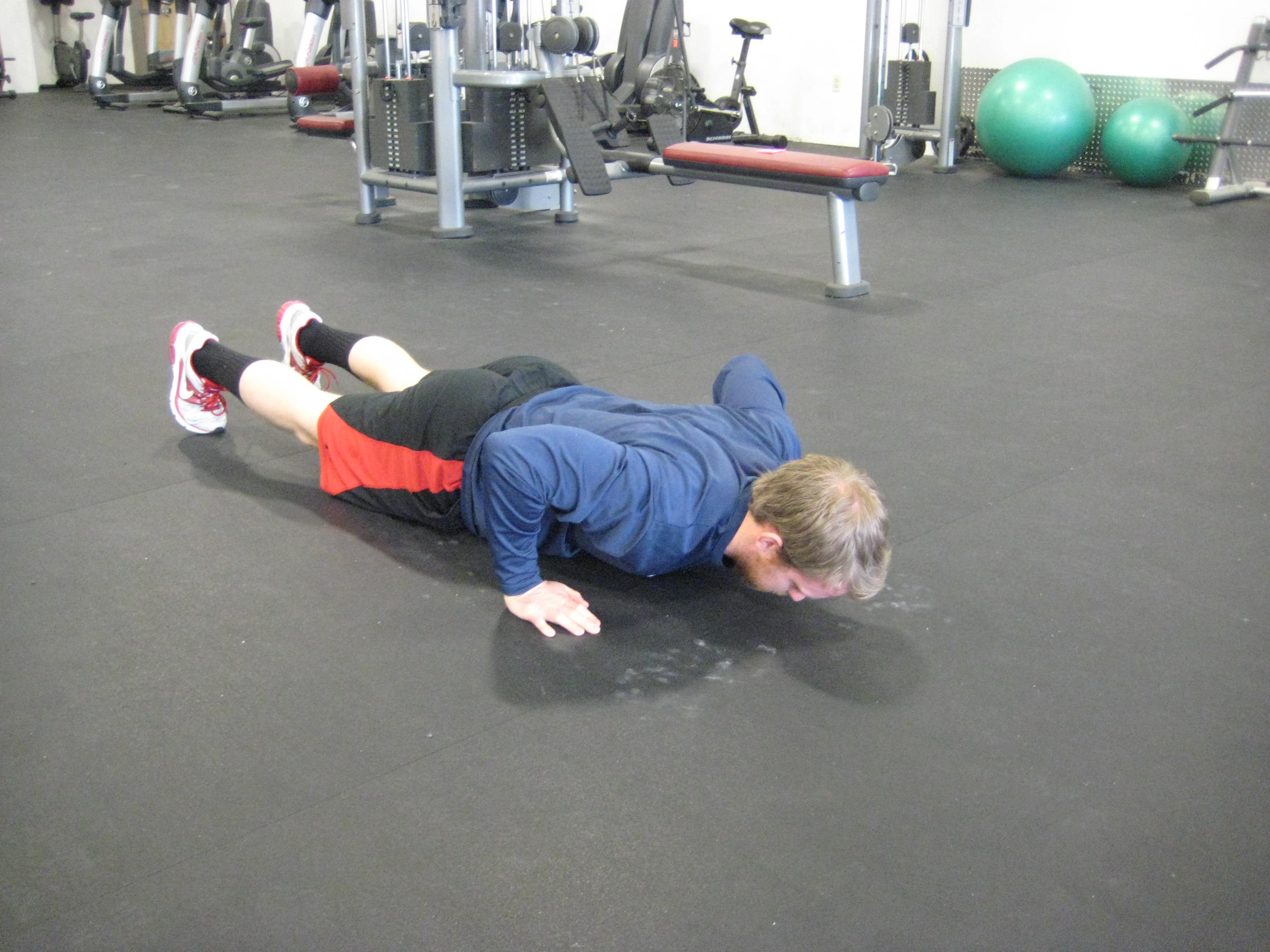 Push-up with shrug at bottom, a common flaw in athletes with poor scapulothoracic control. Has anyone seen my neck? 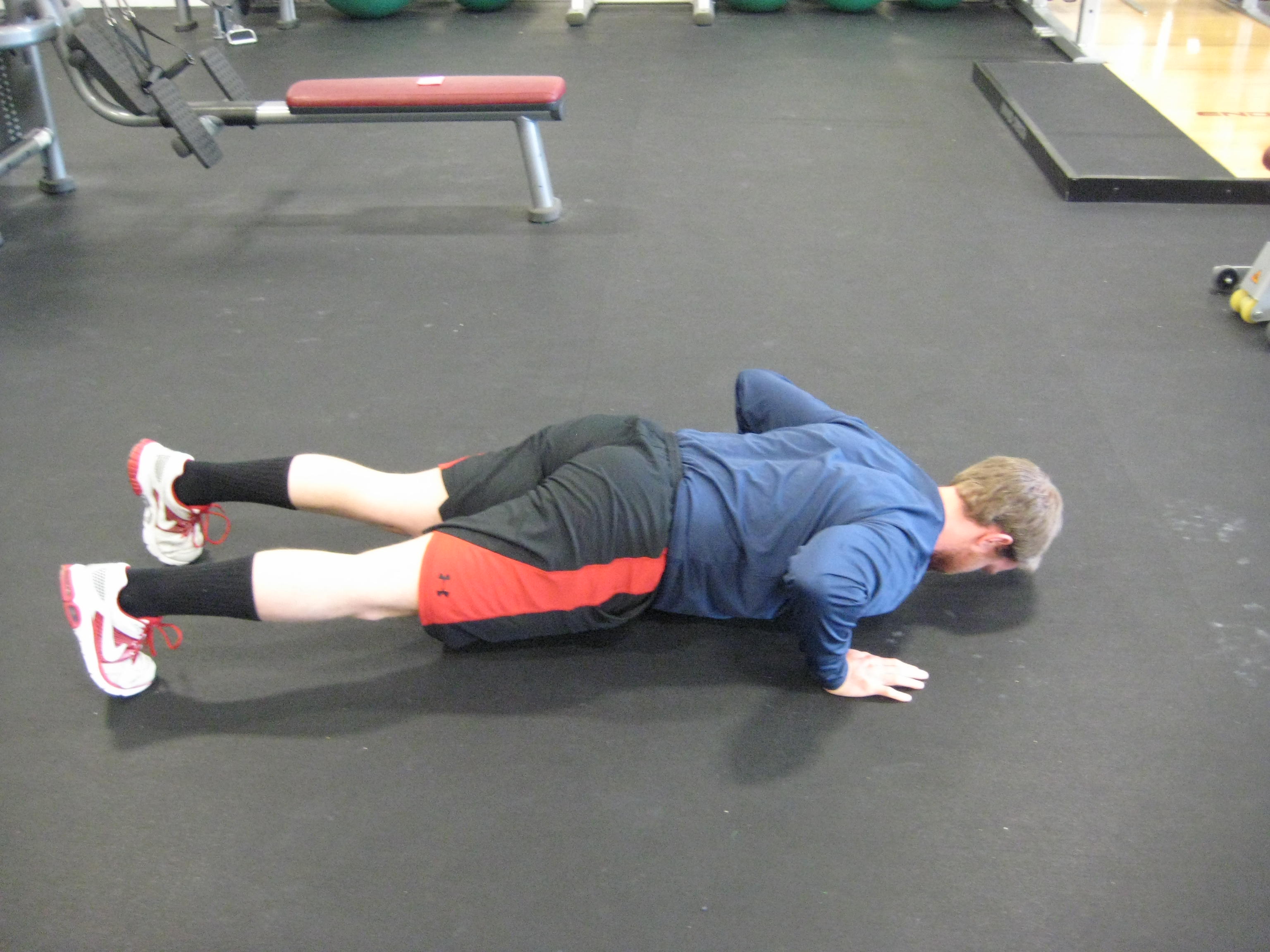 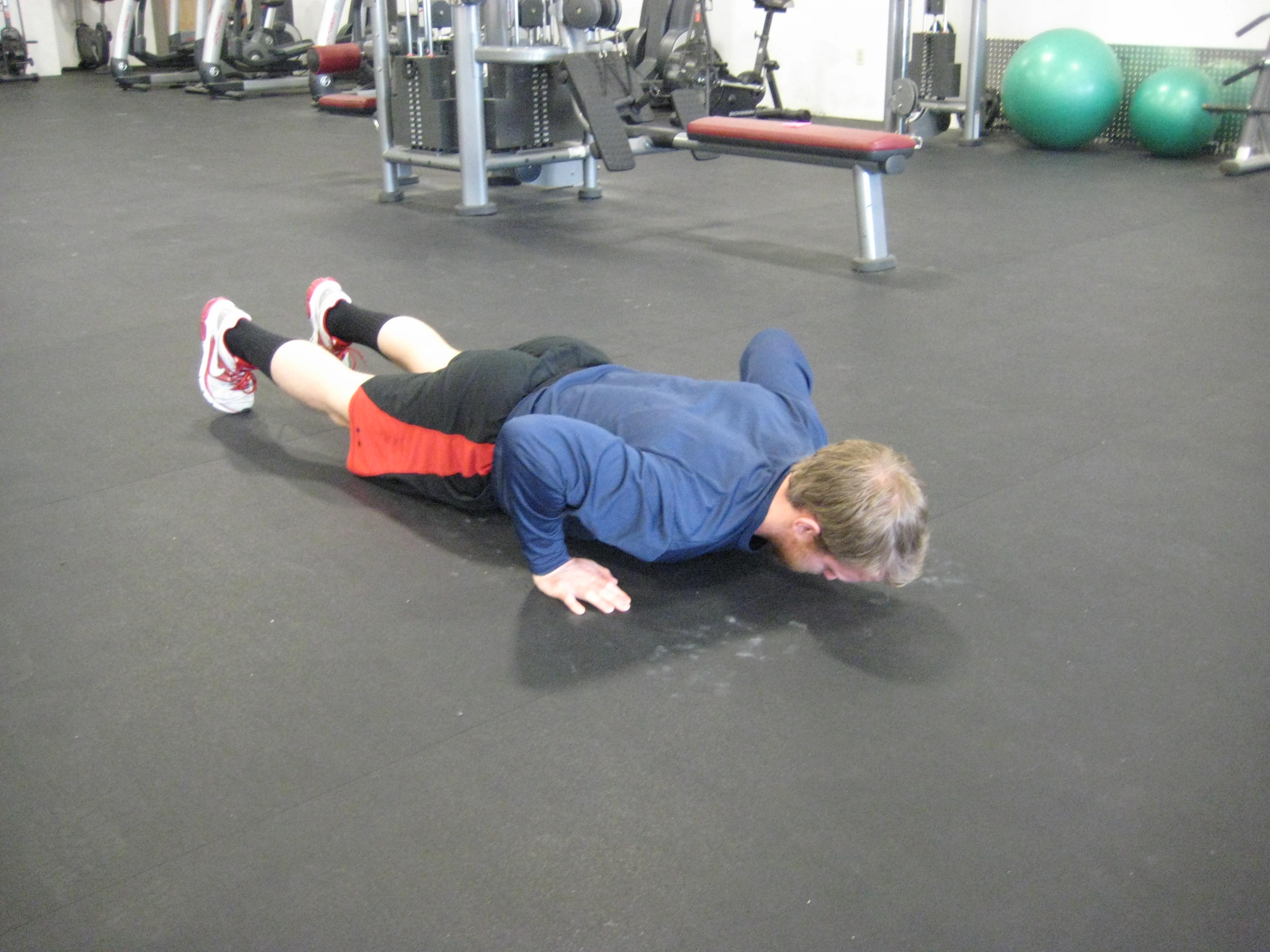 My best attempt at mimicking a push-up with an anterior scapular tilt at the bottom, a common flaw in athletes with poor scapulothoracic control. Note how the shoulder blades appear to angle forward and down toward the ground, and how close the front of my shoulders are to the ground compared to the first set of pictures.

To address these, there are a few different options.

1) Regress the push-up to a front plank. This will help provide an opportunity for the athlete to learn the body awareness of a “tall” position with a neutral spine, as well as help develop the stabilization/strength necessary to maintain this alignment with more dynamic activities.

2) Regress to a “scap push-up” on forearms. This is a more dynamic progression from a traditional front plank that capitalizes on the same stabilization benefits, but adds a component of scapulothoracic movement and control. This allows the athlete to internalize the feeling of pulling the shoulder blades together as they descend down into the bottom position of a push-up, without over extending through their thoracolumbar junction (in their lower back a few inches up from their pant line). 3) Regress to an incline push-up. This is, by far, the regression we rely on the most at Endeavor. Allowing the athlete to perform the push-up on a raised surface decreases the resistance they need to push, ultimately making the exercise easier. This creates a better environment for us to reinforce how to engage the abdominals and anterior neck to prevent excessive extension, move the scapulae appropriately throughout the movement, or address any other movement dysfunctions they may have throughout the exercise. This latter regression reminds me of a conversation I had recently with one of our interns. We were discussing all the things that can go wrong with a movement and the potential causes of this “dysfunction”. Rehashing what we’ve discussed here, the push-up pattern can go wrong because of: lack of abdominal strength/control, lack of anterior neck strength/control, strength, stiffness, or control imbalance of the scapulothoracic muscles, insufficient thoracic extension, lax anterior glenohumeral ligaments and therefore compromised joint stability, and lack of horizontal pushing strength, among others. If an athlete descends down into a push-up and the shoulder blades tilt forward, wing off the back, and or shrug (see pictures under the scapulothoracic control category above), I could immediately think:

Any one or all of these things could in fact be going on and require some extra attention. That said, in most cases the athlete simply hasn’t internalized what the movement should look and feel like. If regressing the difficulty of the exercise (e.g. putting them on an incline), providing a few simple coaching cues and a little practice time clean up the pattern, then all of the movement dysfunction diagnoses was for nothing. In other words, it’s important to give the athlete a true opportunity to learn the movement before breaking down what may be going wrong with it. A lot of times a lack of body awareness is the underlying problem, and some simple coaching cues are the solution.

Lastly, sometimes athlete will do one good push-up and then fall back into an ugly pattern, which was fairly comprehensively described in the original question (elbows flared out, heads dropping down, lower backs sagging, etc.). In this case, a great strategy is to progress them to a “bottoms-up” push-up. These can still be done on an incline, if necessary, but it allows the athlete to start at the bottom with optimal alignment and engagement, push up, and simply descend back down into the same position. This tends to clean up a lot of bad patterns for folks that have sufficient strength to perform the movement correctly, but may have gotten a little sloppy with their technique. It basically concentrates a lot of quality practice time into a condensed set.

Which regression/progression you choose is largely dependent upon the individual’s limitation and what you feel most comfortable teaching. Hopefully this gives you some ideas on simple ways to regress the push-up,  allowing youth and untrained athletes to develop the proper pattern and progress their strength optimally.