On Monday, I ranted about introduced the “Neeld Muscle Fiber Continuum Theory“, which identified what I believe are pretty significant limitations in how the exercise science/kinesiology and performance enhancement communities views the organization of the neuromuscular system. Today I have another “theory” of mine, but one that is much more simplistic to visualize and one that has more practical applications for athletes in all sports, but ESPECIALLY hockey players, which tend to emphasize “doing more” and fighting through injuries as cultural norms.

It’s quite evident that any and every movement, or lack thereof, initiates some sort of adaptation response. These adaptations may be desirable, or in the case of the all-too-prevalent sitting- and hockey-related adaptations of shortened hip flexors and anterior shoulder musculature, not-so-desirable.

In the past, it was typical to see soft-tissue injuries like adductor and hip flexor strains (amongst others) start to pop up when players reached late high school years and beyond. More recently, we’re seeing a more severe injury, the “sports hernia” increasingly at collegiate and professional levels. Unfortunately, because of the trend toward year-round competition and single-sport participation, we’re beginning to see these injuries trickle down to younger ages.

The thing that all of these injuries have in common is that they’re ALMOST never traumatic in nature. In other words, they’re the result of an accumulation of soft-tissue damage. Damage accumulation results from what I think of as “pattern overload” and any associated compensatory movement patterns or force transfer strategies that result when muscles become overworked and/or under-recovered. This is the one of the major factors in a number of injuries, including:

This is far from a comprehensive list, but paints the picture of some very common sports-related injuries that could be prevented. For hockey players, simply consider the number of strides a player takes any given year. Then consider that players are starting to focus ONLY on hockey at younger ages, and playing year-round. The emphasis is usually on competition and not on skill development. The result is a DRASTIC increase in the number of times a player performs a skating stride in any given year, and therefore an equally drastic increase in the number of strides in any 3-5 year chunk of time. The same can be said for goalies; although, naturally, the pattern is different. With this in mind, it’s no mystery why we’re seeing accumulation or pattern overload injuries enter the realms of youth hockey.

Stuart McGill’s research has described repeated lumbar flexion as a mechanism for disc herniations. One of the take homes from this research is that it’s rarely a single incident that results in the injury, but rather the spine has a limited number of flexion/extension cycles before an injury occurs. I’m currently reading Hans Selye’s book “The Stress of Life”, where he describes a similar phenomenon, alluding to the fact that the body has a certain adaptation capacity that, when exceeded, results in injury or, depending on the system, death.

To be clear, I’m not suggesting that either Selye or I would be concerned with a hockey player playing himself to death. I do, however, think that as coaches and athletic development professionals, we often lose sight of the long-term accumulation associated with playing AND training for the game. I like to use the analogy that our bodies are buckets (stay with me). 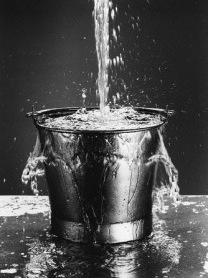 This is your body on hockey.

Think of every movement as a drop of water in the bucket (indicative of a “unit” of soft-tissue stress). The more movements, the more water. Naturally, if the bucket is left alone or allowed to “rest”, water will evaporate out of the bucket, thereby lowering the level. If however, more and more water is dumped into the bucket, it will inevitably overflow, which is indicative of an injury due to excessive soft-tissue stress accumulation. This is the “overuse” injury we hear so much about it, which is almost always more accurately an “under-preparation” or “under-recovery” injury.

The analogy can be further broken down to describe a situation where every structure has it’s own bucket. In this way, a skating stride may put drops in multiple buckets of different muscle groups and structures (e.g. hip labrum, knee menisci, each adductor, hip flexor, hip rotator, spinal erector, etc.). Because every movement is unlikely to stress every involved structure to the same degree, some structures will receives more “drops in their bucket” than others.

Passive rest is not the only means by soft-tissue stress accumulation can be slowed. I’ve been borderline evangelical in my support of regular manual therapy work from an experienced Active Release practitioner. A lower budget (although less targeted) option is to regularly use a foam roller to improve soft-tissue quality. Either way, these are strategies that remove drops from the bucket.

These guys get it

Another simple way is to limit pattern overload. This is why playing multiple sports, and having a true “off-season” is so important for athletes; it gives the highly worked/stressed muscles (and surrounding structures) a time to rest and regenerate. It also provides time for training (think strength and conditioning), which improves the body’s capacity to work and withstand these stresses, and to do so at higher performance levels. Think of it like this:

Ultimately, everything in this model is relative to the intensity, frequency, and location of the stress (for example, playing multiple sports in the form of ice hockey and roller hockey won’t likely result in much of a stress “deload”), but this analogy has been helpful in teaching players and parents how the body works.

EVERYTHING we do leads to an adaptation, as a result of a stimulus or “stress” to the body. Stress accumulates, and if steps aren’t taken to slow and/or reduce the accumulation, injury will result. If athletes are serious about pursuing elite levels, they need to be proactive in their practice, their training, AND their recovery. In other words, they need to empty their buckets.