I got another question via email last week about post-activation potentiation (PAP). The writer mentioned he has been familiar with the practice and has benefited from integrating it into his own programs, but hasn’t seen a lot of other coaches use it.

If you’re not familiar, PAP is phenomenon that has implications for both performance in the presence of fatigue and high power/speed contractions.  Essentially, ongoing or repeated stimulus of a neuromuscular pathway (think muscle contraction) results in any number of proposed consequences that prime that pathway for future force production. The proposed mechanisms included increased Ca2+ sensitivity of the involved actin/myosin chains and increased alpha motor neuron excitability. In both cases, the result is an increase in force production for the same “input” signal, although the former is at the muscular level and the latter is at the spinal cord/nervous system level. If you’re interested in reading deeper into this, I highly suggest reading this review article:

The most common application of this principle in the strength and conditioning world is to pair a heavy resistance training exercise with a similar patterned explosive movement exercise. A few examples include:

These are just a few examples, but hopefully it provides a couple illustrations as to how this principle can be applied. This type of training method is known as “Contrast Training” and has been around for a LONG time. At Endeavor, we’ve used this method in various capacities, including using resisted and unresisted jumps with the Vertimax.

I view it as a method to unlock existing power potential within the nervous system. Naturally then, it’s a method that is appropriate for use within phases that power development is a primary or secondary goal. It’s also an effective method at maintaining maximum strength levels. There are a few important considerations in how this method is implemented:

In general, the first two components here are fairly simple. The higher the intensity, the greater the potentiation. Volume should be kept low so as to induce activation, but not fatigue. Naturally a Back Squat performed at 90% 1-RM for 3-4 reps (or whatever is the individual’s max) would not be likely to improve subsequent power performance because the individual would be too fatigued. In contrast, if the individual performed 1-RM with perfect technique and an accelerated concentric phase (moving the weight up quickly), the “prime” for explosive movement would be more optimal with less risk of creating unnecessary fatigue. This view point is largely supported by the degree of time we have in real-world training situations to implement this method. Some research suggests that waiting as long as 8-12 minutes maximizes the benefits of potentiation (Gouvea, A., et al., 2012), whereas others suggest that 4 minutes may be optimal with values returning to baseline by 8 minutes (Lowery, R., et al., 2012). The discrepancies are inevitably in the employed methods and probably reflect longer rest for higher volumes of training. Unfortunately, in most situations it’s not realistic to wait 8 minutes between exercises, so minimizing the “conditioning stimulus” resistance training exercise volume is an effective strategy to capitalize on potentiation in a reasonable time frame.

With regards to to the selected exercises, it’s important to remember that, while there is certainly some carryover, neural activation networks are movement specific. The more directly the conditioning exercise can replicate the subsequent power exercise, the more profound of an impact the potentiation will have. Essentially you want to think of it as overloading a pattern, and then unloading a pattern. In the examples above, you’ll note that a back squat is paired with a vertical jump, but a deadlift is paired with a broad jump. The primary difference between a broad jump and a vertical jump is that there is a greater forward torso lean and  posterior weight shift with a broad jump, which allows the individual to propel themselves forward more than upward. Similarly, a deadlift involves a greater posterior weight shift and more heavily loads the posterior chain compared to a back squat. These differences are slight, but notable. 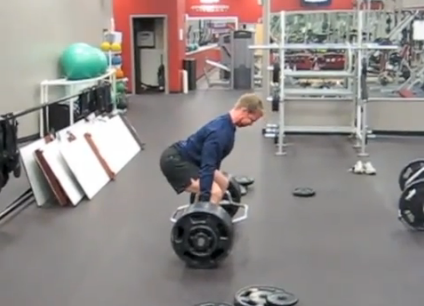 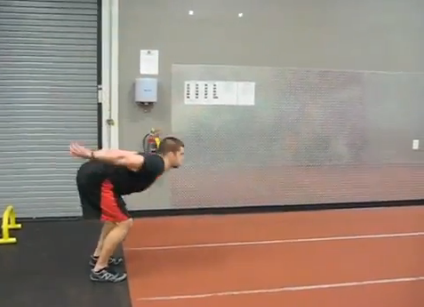 Broad Jump
Hopefully this gives you some good ideas on how and when to implement this type of strategy. As with any training method, it’s important to keep the goal in mind so you can program this method into the appropriate phase of a training cycle. This fits very well into an off-season phase where power development is the primary target. It would not fit very well in an in-season environment where the players have a substantial amount of accumulated fatigue (you can’t maximize peak power from a diminished starting point). In contrast, it may fit well into a short in-season training cycle where the players have decreased practice and game loads, are fairly rested, and need to return to some max strength and power work, briefly. I’d also urge you to only use this method with exercises that are EXTREMELY familiar to the athlete. As I’ve said repeatedly in the past, you have to move well before you can move more or move faster. The athlete should be proficient in both the resistance training and power exercises. If you’re interested in more information on PAP, Bret Contreras wrote a great article on the topic a few years ago, which you can find here: Post-Activation Potentiation: Theory and Application