Peaking For The Post-Season

This week is off to a fun start. While I think most people can agree Sunday was one of the worst Super Bowls in the history of the competition (especially disappointing because I’m a huge Peyton Manning fan), I was fortunate to have the day off and be in town so the Endeavor crew, our significant others, and a few other friends met a friend’s and ate more corn chips than would ever be considered socially acceptable. Terrible game; great day.

Yesterday we got hit with an inconvenient amount of snow, so we were slow at Endeavor, which provided a perfect opportunity to break up the monotony of structured training and have a little fun. Matt Sees and I spent about 3 minutes coming up with bastardized version of “Can Jam” using the resources available in our facility and came up with: 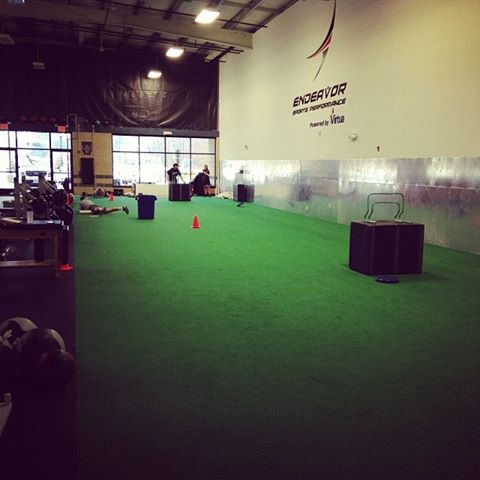 The two boxes are 20-yards apart with a 12″ and 18″ hurdle stacked on top. Each contestant must keep their front foot behind the front of their own box, and gets 3 throws with a dynadisc, with scoring as follows:

Sees and I played for about an hour, him taking the 3-game series 2-1. It was a lot more tiring than we thought it would be, especially since we accidentally put the boxes 20-yards apart instead of the intended 15, but it was a nice way to break up the day and get some blood flowing.

This is an exciting time of year. With football officially behind us, we have Olympic hockey only a few days out and then the homestretch of the NHL season and start of the playoffs. On a more grassroots level, the youth and junior teams I write programs for and/or train are wrapping up their seasons over the next 4-6 weeks. I just checked the Tier I Elite League stats for the U-18 level and 4 of the top 10 scorers are kids I’ve trained, and our Junior team has won 11 of their last 12 games and just clinched home ice advantage for the first round of the playoffs.

The final stretch of a season is an important time. Unfortunately, it’s also a time when people do the exact opposite of what they’re supposed to do. In order to illustrate this, I think it’s worth taking a step back and looking at what the point of a hockey season is, especially in development leagues. Simply, the goal is for the players and team to develop, in technical and tactical terms. If the players don’t get better, the season was a waste of time, regardless of what the team’s final record was. With this in mind, in-season training is meant to support on-ice skill development by improving physical capacities off the ice that will not significantly interfere with the quality of on-ice practice and/or the player’s ability to demonstrate their abilities in games.

This is a huge concept and one that, as simple as it sounds, is still largely misunderstood by youth parents and coaches alike. I’ve discussed more specific points about in-season training in the past, and would encourage you to read or re-read these if you haven’t already:

It’s funny to me when I hear a parent say “my kid doesn’t even look tired when they’re finished training!” That is the point! As a culture, we need to stop equating “sore and tired” with good training, as neither of these things are requisites for improvement. Don’t get me wrong, there are times throughout the season when our players will definitely be sore and/or fatigued from off-ice work, but this is more the exception than the rule. The goal is to minimize fatigue and soreness, while still creating a positive adaptation, so they can continue to develop on the ice. If the players have off-ice training before practice, as is often the case, training in a way that leaves the kids exhausted before they step on the ice directly impairs their ability to practice at a high level. This is not a mental toughness problem; it’s a problem in resource utilization.

Within this context, the opportunity to make huge leaps in physical development and therefore huge leaps in the players’ abilities to utilize these new physical capacities for skill development is the off-season. This not only highlights the problems associated with forfeiting quality training time for tournament teams and showcases, it also provides a nice parallel for how in-season training should change coming down the home stretch of the season. One of the big mistakes coaches and players make is hitting the panic button with a few weeks left in the season and trying to pile in a lot more work to prepare for the playoffs. I’ve even heard of some players starting to train at the end of the season to make sure they’re ready for the post-season. The reality is this is likely to have the exact opposite effect. If the players have been doing their jobs off the ice, they should have made improvements in or at least maintained their speed, power, strength, and conditioning. The end of the season is a time when fatigue accumulation is at an all time high. Attempting to pile on a lot more on- or off-ice work will push the players deeper into an over-reached or over-trained state, and tap into their already diminished recovery resources.

Peaking for the post-season doesn’t require the cessation of training altogether, but training should be tapered. How and when you do this really depends on the structure of the last few weeks of the season and the playoffs, and what the coaches’ have planned for on-ice work. A few things to consider:

A Mobility/Recovery Circuit
For our junior players, we’re in what I would consider a pre-taper phase, that has looked like:

Hopefully this helps you move forward in designing programs appropriate for the needs of your team to allow them to peak at the right time. If nothing else, know that it’s okay to do less at this time of year in favor of ensuring you’re delivering players with more energy reserves to the ice. There is a lot of information in the articles linked within this post, so be sure to check those out if you haven’t already. As always, if you have any specific questions, post them below!