I’ve been very fortunate over the last several months to have an opportunity to work closely with Ned Lenny, a brilliant (and incredibly humble) physical therapist in our area. It’s always great to get a different set of eyes on our players and a different perspective on certain adaptations that we may see. Because Ned works mostly with injured players, he has some added insight into what adaptations may predispose a player to injury. Maybe more importantly, he is great about explaining things in a way that helps players understand how things they may not normally care about have a profound effect on their performance. In today’s post, I wanted to highlight two lesser known (or at least infrequently discussed) goalie training considerations.

Stick Side Shortness
In an effort to keep the stick flat on the ice, goalies have a tendency to laterally flex (think side bend) on their stick side. This is certainly not the ONLY movement possibility for a goalie to accomplish this goal, but is an example of the body following the path of least resistance. As goalies accumulate time in this position, the body adapts so that the stick side abdominal wall becomes restricted and the opposing abdominal wall becomes excessively long. Naturally, you can imagine how this might affect the positioning, movement and consequent performance of the adjacent joints: pelvis/hips, lumbar spine, thoracic spine, and rib cage. But the implications don’t stop there. This side bending results in a lowered shoulder on the same side, which will impair the player’s ability to raise the arm without causing secondary compensations within that or other (e.g. the neck) joints. In other words, developing a side bent posture on one side can cause symptoms in a number of other locations in the body, several of which are very remote from the actual cause! 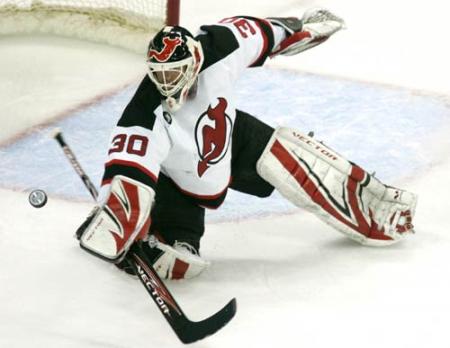 Unfortunately, it’s not just the time on the ice that matters. As the body adapts, there is an increased tendency to seek this “new neutral” as a resting place in other postures and movements throughout the day. For example, a right handed goalie (catches left) might be more likely to slouch to the right while driving a car, sitting in a desk, sitting on the couch, eating at a table, etc. This is especially true for right handed goalies, as people in general have a tendency to shift their weight to the right more often and close down their right abdominal wall as a consequence of both structural and movement pattern biases in this direction. The more time they spend in the position, the faster the body adapts and the more it cements this position in. In addition to being aware of their posture throughout the day (and even while playing), most goalies will benefit from some stretching to open up the lateral abdominal wall on their stick side. One example of an effective stretch is the “Standing Triceps Stretch with Lateral Lean” pictured below:

This is a great stretch to open up the entire lateral line of the body. If you’re interested in more static and dynamic stretches for hockey players, check out my Off-Ice Performance Training Course which outlines dozens of these in detail!

Forward Head Posture = Unnecessary Goals
I realize that postural analysis isn’t exactly the sexiest area of hockey training, but that doesn’t mean it’s not important. In general, postural malalignments can predispose a player to a number of injuries. As with the example above, the injuries (or symptoms) aren’t always in the same place or even adjacent to the limitation. That said, most players couldn’t care less about injury prevention until they’re hurt. It’s a backwards thought process, but an understandable one. If you aren’t hurt, why worry about not getting hurt?

In this regard, it’s important to find ways to explain things to players in a way that will make them care about doing the right thing. Forward head posture describes an environment in which the head is displaced forward, so that the ears are in front of the shoulders from a side vantage point. This can lead to a wide range of performance limitations, but Ned pointed out that it can also make it very difficult for goalies to see pucks at their feet. 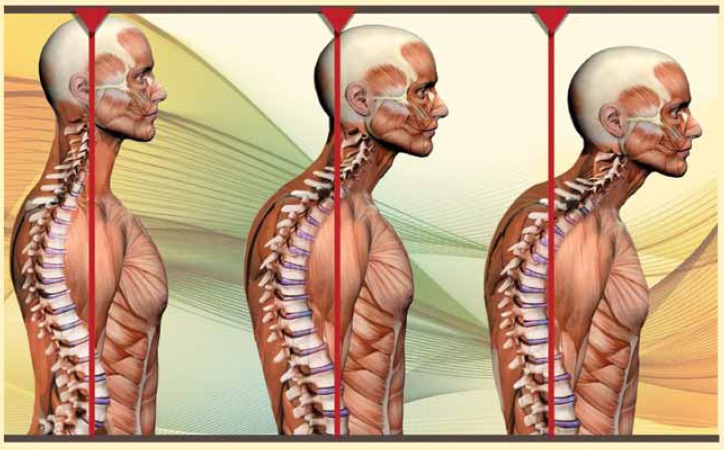 Interestingly, his “theory” has been corroborated by the goalies he’s worked with that exhibit this posture. While the image above displays a pretty severe case of forward head posture (far right), it’s really not that far past the norm. If you imagine that good looking guy with a goalie helmet on, if a puck were to hit his pads or otherwise fall by his feet he would have to pull his chin in and rotate his head down in order to position his eyes downward. In contrast, if his head was in a more neutral position, all he’d have to do is direct his eyes downward and he’d be able to see a substantially greater area around his feet. It might seem like an insignificant change, but that small “chin tuck” substantially improves goalies’ vision around their feet and therefore their reaction time in reacting to pucks around the crease. Performance in hockey, especially for goalies, can often be decide by millisecond reactions (for better or worse). The closer a goalie’s posture falls toward optimal, the faster they’ll react to shots AND the tighter their visual range around their feet. Small change. Big reward.