It’s been an exciting few days for our staff at Endeavor, and for the hockey world in general. On Friday night, our long-time training client Johnny Gaudreau won the Hobey Baker Award, signed with the Calgary Flames, and was immediately shipped out to Vancouver to prepare for his first NHL game ever on Sunday. The next day Union, who has two players we’ve trained in the past on their team, won their first NCAA Championship in an AWESOME game. Congratulations to the Union players and staff for a memorable season with an unbelievable finish. Well deserved! And finally, on Sunday Johnny played his first game with the Flames and ended up scoring his first NHL goal in the game! 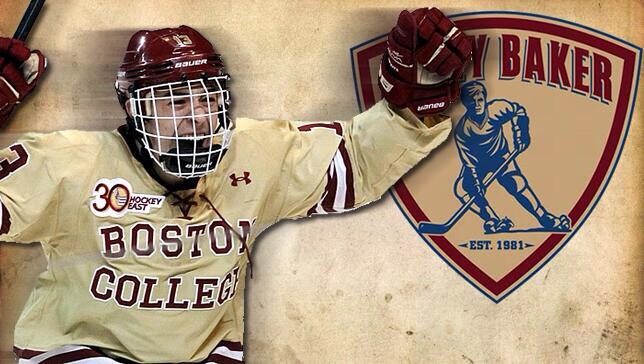 It’s been a lot of fun watching Gaudreau advanced through the ranks. When I was 13-14, I spent my Summers running hockey camps, one of which was at Hollydell, where John’s dad serves as the Hockey Director. I remember watching John and his brother Matt (along with several other players that I’ve later trained and are now playing D1 hockey) skate when they were ~3/4 years old. I don’t know why I still remember this, but John actually went inside-outside on a 1-on-1 against a kid at THAT age. I think I remember it because it was remarkable that they could even move around the ice, let alone handle a puck, and THEN have the ability to pull off an intentional move. Over 15 years later, he continues to regularly do remarkable things on the ice…

Hobey Baker Highlights
World Juniors Highlights
Endeavor Highlight
John has had one of the most decorated Junior/College careers in the history of the sport, and accomplished everything despite being significantly undersized at every level he’s ever played at. Maybe it’s because I’m still waiting on my last growth spurt, but it’s awesome to see an undersized guy be so successful (It may be a good time to re-read this: A Letter to Parents of Undersized Hockey Players). I think it just highlights the fact that there are several ways to be successful, even at the highest levels. As I pointed out several weeks ago in this article series (See: Dissecting Performance Limitations, Assessing and Monitoring Performance Indicators, and Layers of Program Individualization), there are a lot of factors that determine performance levels, but especially at higher levels there are specific roles that need to be filled. With this in mind, it should be empowering to players to know that if you’re undersized, you still have a strategy to reach high levels (study the game, put a lot of work into developing advanced skill sets, and put a huge emphasis on preparing physically off the ice). If you’re not a goal scorer (or even a playmaker) there are roles on teams for guys that are exceptional at face-offs or big, strong, fast, and defensively sound. There is always a strategy to help you maximize your full genetic potential, which is the goal!

Training at Endeavor
A couple weeks back, I mentioned an outstanding learning opportunity for a young S&C coach that wants to gain more experience working with hockey players (Strength and Conditioning Internship). Since then, I’ve gotten an influx of emails and internship applications from some great candidates. Over the last few weeks, I’ve also gotten several emails from parents/players asking about coming into Endeavor to train and/or asking if I run any camps. We do regularly have athletes come in from out of town to train with us. We have a few kids that will move to the area and live with someone here to train over the Summer, but several others that will come in for a week or two and then do their program from wherever they’re from.

If you’re not local enough to train with us everyday, this is how it works:

At this point, we’ll continue to design new phases for you after each one ends. The good thing about this model is that you get to go through the assessment process, so we’re not making assumptions about your structure, movement, and performance abilities. This allows us to design more specific programs, teach you how to do everything properly, and then have a better foundation to deliver specific programs to you in the future. I know flying into Philly isn’t always cheap, so we basically set it up so the first month is $225, and every month after that is $125. I realize there is a degree of bias here, but that’s an unbelievable deal! Just call the facility (856) 269-4148 if you’re interested in scheduling a trip, and we’ll set it up!

I’m not going to have an opportunity to run a camp this Summer, but I’ve been thinking about doing a 1- or 2-day seminar in the early Fall that discusses my system for off-ice training for youth hockey players that would be geared toward youth coaches and parents to help bridge the gap between what high level hockey S&C coaches are doing with their players and what is common practice at the youth level. I’m still on the fence about whether I’ll do it at all and if I do, exactly what I’ll talk about. With that in mind, I want to hear from you! Do me a quick favor and drop a note in the comments section below about whether you’d be interested in attending a hockey-specific seminar that I run, how many days you’d prefer it to be (1 or 2), and what topics you’d be interested in hearing about.

Thanks in advance. Looking forward to a great off-season!