Last week the Endeavor staff wrapped up a new training program that David Lasnier wrote based on some of the principles we’re experimenting with from Joel Jamieson’s book Ultimate MMA Conditioning. It’s certainly been a change of pace, as none of us have done an endurance block of training in quite some time.

One of the more novel components of this latest training phase was intentionally slow concentric phases of lifts. As a quick refresher for those of you that may have slept through or not taken an anatomy and physiology class, in general there are three types of contractions:

While most people assume that muscles are shortening, lengthening, or remaining the same length based on external joint movement, the truth is that “external” and “internal” movement aren’t always the same. For example, there is some research that suggests that when people shift their weight forward, which causes the illusion of the calves lengthening, the muscle fibers are in fact shortening while the achilles tendon lengthens. This is not inconsequential as it’s the position and length change of the muscle fibers that determines the force producing ability of the muscle Admittedly, this is more of an academic point; making determinations based on joint movement is more practical and generally appropriate. 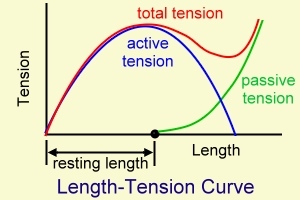 Length-Tension Curve. Notice how the tension (or force) that a muscle can produce varies as its length changes

While certain exercises lend themselves more to specific phases of the lift (hang cleans with a high catch position and deadlifts tend to emphasize the concentric phase of the lift more than the eccentric), almost every exercise can be broken down into four phases:

When designing training programs, these phases are used to dictate the tempo of the exercise. Each strength coach approaches this differently, but more common approaches include:

Pauses at the starting positions of lifts aren’t used frequently, or at least aren’t dictated frequently. In general, the athlete will only pause at this spot if they need to get some more air or restore a tight position from which to do the next rep.

Slowed eccentric phases are used frequently to increase the time under tension of the lift, which is a known strategy to help improve gains in muscle hypertrophy (size) and can also be an effective strategy to improve strength.

Pauses at the bottom are used to interrupt the stretch shortening cycle and put a greater emphasis on the athlete’s ability to develop force quickly, a quality known as rate of force development (ROFD).

Similarly, it is quite common to simply encourage the lifter to perform the concentric phase of the lift (the “up” portion) as quickly as possible. Motor units are recruited from small to large for any given movement. When the athlete attempts to move the weight concentrically as quickly as possible, the recruitment threshold of high force motor units lowers, meaning more motor units and therefore more muscle fibers are recruited to perform the exercise. This is true even if the weight doesn’t actually move fast. Indeed, it is the INTENTION to move quickly that lowers the threshold of these motor units. To oversimplify, intending to move quickly recruits more muscle fibers. And because the order of recruitment is preserved, this means that both small AND large motor units/muscle fibers would be active. Everything gets trained. 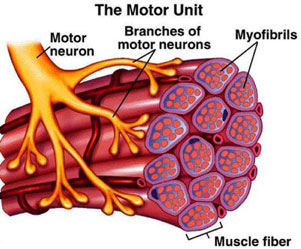 It is this latter point that I want to expand on. The foundational rationale of this strategy is that recruiting more muscle fibers is always desirable. After all, more muscle fibers means more force, more power, and typically faster movement. These are certainly desirable qualities for athletes and even for those that just want to get big, strong, and fast. However, as Joel did an excellent job of discussing in his book, and as I alluded to in previous posts (See: A New Perspective on Program Design, Hockey Conditioning: Understanding Fatigue, Hockey Conditioning: Combating Fatigue), training high-threshold muscle fibers constantly may create less than optimal adaptations. While it would certainly improve your body’s ability to move with speed, strength and power, it would also teach your body to rely on these high-threshold fibers and accompanying fuel systems for all tasks, even when it may not be necessary.

It is the smaller motor units that possess a greater oxidative capacity and therefore are more fatigue resistant. In contrast, larger motor units possess a greater ability to produce force (power and speed), but can only do so for a brief period of time. While it’s true that both smaller and larger motor units are activated when attempting to perform the concentric phase of the lift quickly, it will ultimately be the fatigue in the larger units that dictates an inability to perform more reps. Simply, the high force units fatigue faster, and the sets over. The low force units are active, but they aren’t pushed even remotely close to their fatigue threshold because the set ends when the larger units tap out.

Therefore, performing exercises with a slower concentric phase with lighter loads will help target the smaller units, which will lead to improvements in the size, strength, and fatigue-resistance of the active muscle fibers. Placing a greater focus on these units will help ensure that they play a greater role in your performance, which will ultimately allow you to compete harder longer and recover more quickly. As with anything, it’s important not to take this concept and plug it into your program haphazardly. The strategic application of specific training principles is what drives continued adaptation. Random compilations of exercises and strategies will create random results.