Over the last couple weeks, there have been a lot of great discussions in my LinkedIn Group “Hockey Training“. A few days back, Dr. Chad Moreau, who has experience working with a wide range of hockey players (including the Edmonton Oilers of the NHL and Long Beach Ice Dogs of the ECHL), posed the question “Does Working Out in the Gym Improve Performance on the Ice?”

While I think many of you would consider this a no-brainer, the number of high level players that find success despite a lacking or downright terrible training program and the number of players that are physical specimens that still can’t make it to the next step warrants having this discussion. Also, many players seem to look toward off-ice training to improve specific on-ice skills, which always warrants qualifying. Below is a slightly modified version of my response to Dr. Moreau’s question. I think this is a great discussion topic, so please post your thoughts in the comments section below!

It seems fairly obvious that off-ice work would lead to on-ice gains, but I think it’s important to qualify the degree of transfer and, as Chad mentioned, there are certainly exceptions. To be overly simplistic, I generally think of “skill” and “physical capacities” as two separate domains. Skill can refer to skating technique, puck handling ability, vision, ability to read the play, etc. Physical capacities refer to measures like speed, power, strength, conditioning, etc. Certainly, there is overlap between some of these categories. For example, if an individual’s skating technique suffers because they don’t possess the strength to maintain an individual-specific state of deep knee and hip flexion, then strength training (or local muscular endurance, depending on the limitation) would likely result in a transfer to their skating ability. Likewise, if an individual is incredibly weak AND hasn’t figured out how to utilize their body weight and the whip of a stick to shoot hard, then doing some off-ice strength training and rotational power work (e.g. med ball throws) would likely cause them to shoot harder.

Check out this post for more information on how off-ice training can help you score more goals: What Muscles Do You Use to Shoot?

There are plenty of examples of guys that experience success at every level because of their superior skill sets. To a degree, I think it’s a matter of where you invest your time, honing your skills or strengthening your capacities. Every player needs a mix of both; some err more toward one side than the other. I think the players that succeed without off-ice training do so largely because they have some “genetic” gifts that put them in the middle or upper part of the pack with regards to size and speed anyway. In other words, the short slow player with awesome hands and a great knack for the game still isn’t NHL-bound. And there are just as many (I suspect more) examples of players that reach a certain level BECAUSE of their dedication to off-ice training that would have never had an opportunity to otherwise. Training is the equalizer. 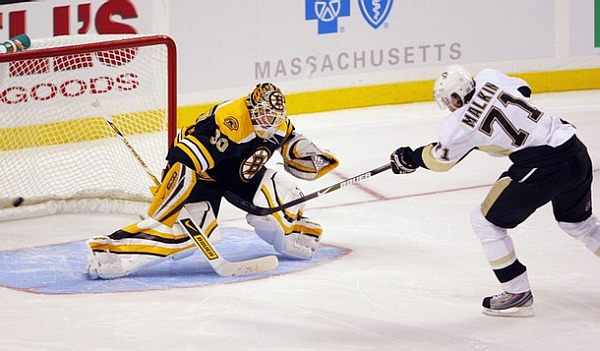 Training may not make or break a player’s career if they’re gifted with the size and speed of a player like Malkin (Disclaimer: This is not to suggest that Malkin doesn’t train hard)

I also think there’s something to be said for the “performance gap” idea, which is simply the difference between performance and potential. Even if training isn’t what allows a player to reach or contribute at any given level (for a lot of players, training does just that), it will certainly help a player close in on his or her full potential and ultimately allow the player to be as successful and durable as possible. Some of the skilled high level achievers are either content with where they are or don’t believe the off-ice work could really take their game to the next level. Similarly, there are some players that take their off-ice training very seriously, and have for years, that would likely benefit more from focused on-ice skill work. In both examples of these extremes, the players may just have a tendency to gravitate toward what their best at and what is most comfortable for them to work on. Ultimately, it’s up to the player to decide what level of sacrifice they’re willing to make to fulfill their potential. The players that are willing to really push the limits of their skill and physical capacities push the boundaries of what’s possible within the game of hockey, and are responsible for making hockey the best game on earth!

P.S. If you want to maximize the transfer of your off-ice training to on-ice performance, you’ll want to follow a specific hockey training system designed to do just that.