In collegiate and professional athletics, the term “sports hernia” seems to be frequenting conversations more and more.  While the diagnosis of a sports hernia seems to be increasing both in prevalence and media attention, the injury remains poorly understood and defined.  An in-depth look into the associated research helps explain why there is so much confusion surrounding this injury.

The primary reason for the confusion surrounding sports hernias is that there is no established definition of this injury.  In fact, there isn’t even an agreed upon name for this injury, as sports hernias have also been referred to as: athletic pubalgia, sportsman’s hernia, Gilmore’s groin, athletic hernia, hockey groin syndrome, Ashby’s inguinal ligament enthesopathy, incipient hernia, and osteitis pubis (1).  Generally sports hernias are a label given to a situation involving an athlete that has chronic pain in the lower abdominal or upper proximal medial thigh area.  This pain is further aggravated by rapid rotational or kicking movements, sudden changes in direction, and anything that increases intraabdominal pressure (coughing, holding your breath, etc.).  Typically these symptoms have persisted for an extended period of time and have not responded to non-operative treatments (rest, ice, heat, anti-inflammatory drugs, stretching, etc.).  Physical inspection is unable to find any true hole in the abdominal or inguinal wall or protruding tissue, which are characteristics of “traditional” hernias (2).  Essentially this means that sports hernias aren’t hernias at all.  Naturally, then, the questions is: What is a sports hernia?

The most commonly accepted definition of a sports hernia is a weakening of the posterior inguinal wall.  It is important to note, however, that this is one of MANY proposed definitions.  Complicating the issue further is that sports hernias rarely occur in isolation.  Upon surgical inspection, the following are commonly found:

Symptoms can also be referred from injuries such as osteitis pubis, hip labral tears, femoroacetabular impingement, stress fractures of the hip bones, hip joint degeneration,  lumbar spine and SI joint injuries, and digestive tract diseases (1-6, 9).  Further complicating things, symptoms are sometimes referred from the opposite side (1).  This means that an injury on the left side may be asymptomatic on the left side, but produce symptoms on the right side.

Despite a generally positive outcome following both open and laparoscopic surgery (sometimes accompanied by adductor release), these injuries should be prevented at all costs.  Having been through double hernia surgery myself (umbilical and inguinal), I can honestly say that the first week post-surgery was 168 hours of the most excruciating pain I’ve ever felt.  I wouldn’t wish that on anyone.

Don’t be turned off by the complex anatomy or varying origins of the symptoms.  To a large extent, those issues are primarily the concern of a physician or surgeon.    While understanding the complex anatomy and diagnoses of sports hernias isn’t within the job description of a strength coach, actively preventing these injuries through appropriate programming certainly is.

What You Can Do

Sports hernias are most common in ice hockey and soccer players, with some football players also experiencing the injury.  It is thought that the rapid changes of direction and strong rotational movements may be responsible for causing a progressive degeneration of the posterior abdominal wall.  Interesting to this explanation is that baseball players, who perform high force, high velocity rotational movements with every throw or bat swing, are largely left out of sports hernia discussions.  Nonetheless, the absence of these injuries in youth sports, and the increasing prevalence among collegiate and professional athletes suggests two possible mechanisms for this progressive injury: 1) The significant forces and stresses associated with higher level athletics overwhelm the lower abdominal/hip myofascial system over time; and/or 2) The injuries are progressive degenerations that don’t manifest symptoms until later in the athlete’s career.  The scientific literature has only revealed two modifiable risk factors: a decrease in hip range-of-motion (9,10), and a strength imbalance between the adductors and abdominals (adductors being relatively stronger; 6).  Specific to adductor injury (but not sports hernias), research has shown that a hip adductor:abductor strength ratio of less than 80% predicts subsequent adductor strain in professional ice hockey players (11).

At first consideration, this seems to create an interesting paradox whereby adductor weakness may be responsible for one proximal injury, but adductor strength is responsible for another.  It is important to note that both of these risk factors are relative strength measures.  The key is balance.  It may be the case that abdominal wall strain injuries are most common in soccer and ice hockey athletes because of an adaptive postural change.  I’ve had the fortunate experience of working with a wide variety of athletes.  Invariably, male soccer and hockey players have the shortest, tightest hip flexors causing considerable anterior pelvic tilt.  Noting that the rectus abdominis, internal and external obliques, and trasversus abdominis all have attachments on the anterior pelvis and pubic ramus, an anterior tilt would increase the stretch and accompanying stress to these muscles and their associated fascia.  Consequently, every movement involving a lengthening of these tissues would cause a significant stress to the points of insertion and relatively thin aponeuroses of this musculature.  It would be premature of me to say that this is definitely a mechanism or causative factor.  However, this pattern leading to anterior pelvic tilt seems to be especially prevalent in older (18+) male athletes; sports hernias are also more prevalent in male athletes (extremely rare in females).  Coincidence?

With specific regard to hockey, in some instances, pain seems to peak during slap shots.  The thought is that the aforementioned structural changes may lead to an adaptive weakening of the abdominal musculature in a specific pattern.  One of the mistakes I’ve made in the past is to assume that a balanced program will help mold a balanced athlete.  Sports by nature are unbalanced, especially sports such as hockey and baseball where repetitive rotations occur in the same direction.  I recommend doing MORE core work (e.g. stabilization work: Pallof Presses and dynamic work: med ball wall throws) in the direction OPPOSITE to the repetitive rotation performed in the sport.

Taking everything into consideration, it seems the best way to prevent sports hernias is to maintain hip range-of-motion, prevent excessive anterior pelvic tilt, and strengthen the adductors and abdominal musculature.  The following exercises may be used to achieve these goals. NOTE: This is not an all-inclusive list of exercises.  Common core stabilization exercises such as prone, side, and supine bridges, and Pallof presses, chops, and lifts are also warranted. 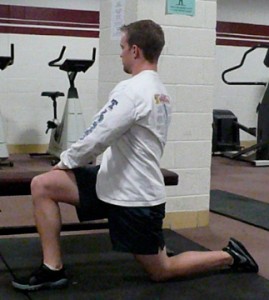 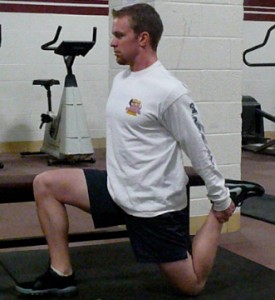 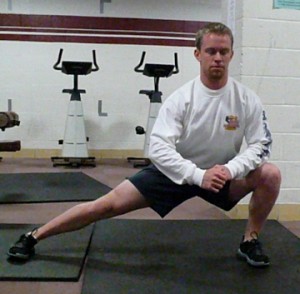 References
**Special thanks to Eric Cressey for teaching me the Rectus Femoris Mobilization and a slight variation of the Adductor Magnus/Medial Hamstrings Mobilization.