Last week, I got a message from Jim Cruver about a video on concussions in hockey that he thought I should check out (thanks Jim!). This actually aired on ESPN mid-last week; it’s definitely worth the 7-minutes to watch. Check it out:

Great to see some of the teams from my home-town making the video as part of the goon-squad. And I don’t have the cleanest mouth, but I’d be embarrassed if I were featured on ESPN saying some of the things these coaches were caught saying to young kids.

My pro-USA Hockey American Development Model stance continues. I applaud Kevin McLaughlin, Senior Director of USA Hockey’s Hockey Development program, for the steps he’s taking in trying to cut back on hockey concussions at younger levels, and most notably for pushing the checking age up to 13, instead of 11.

I know the contact-enthusiasts will argue against this change, but the bottom line is that the physical development range is too large and the psychosocial maturity is not developed enough at this level for checking to be safely and properly implemented. There needs to be a policy change in the interest of protecting our young players and Kevin McLaughlin is taking the steps to make this happen. If you’re initial thought is, “checking is a part of the game, and shouldn’t be removed from the 11-12 year-old level,” I’d urge you to consider how you may feel if your son was drilled from behind by a 12-year old that looked like a 16-year old, suffered a concussion, and missed 6 months of playing. The point isn’t that checking isn’t a part of the game, it’s that it’s being implemented the wrong way, especially at these younger levels. A change in emphasis needs to start with coaches and trickle down to players and parents, quickly.

The #1 concern in making this change is that players will be less “skilled” at giving and receiving contact at the 13-14 year-old level because they haven’t had as much practice or experience. Logical argument. I think the big thing is that MOST kids aren’t being taught how to give and receive hits at any age, they’re just told to go after people. But that argument aside, there’s actually been some research on this issue that will help shed some light on whether early exposure helps make contact safer at the bantam level.

Last sentence bolded for emphasis. Basically what this is saying is that players that have been checking since the 10-11 y/o age, were TWICE as likely to sustain a checking-related injury at the 14-15 y/o level compared to those that were just checking for the first time at this older age level.

These are far from the only two studies that illustrate these points, but they’re a good start. The take home messages from these studies is that introducing checking at younger ages substantially increases the injury rate at these levels, AND has absolutely no protective effect at older levels. In laymen’s terms, it’s a lose-lose. 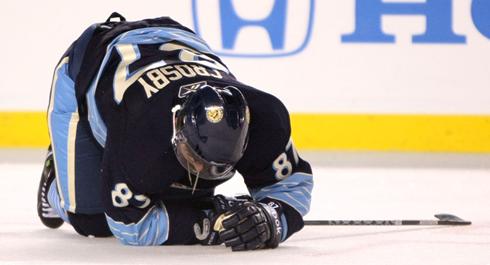 Hockey can’t afford to lose any more players like this.

Hockey needs to get away from the “hit to hurt” mentality and get back to teaching the original intention of contact in the sport-separation of the player from the puck. Every hockey fan loves to watch a big hit, but we need to keep the potential consequences of these hits in mind. Some of the game’s best players have their careers cut short because of hits that probably shouldn’t have ever happened. Concussions in hockey deemed accidents are one thing, but coaches and parents (and even players!) encouraging players to take a run at someone is unacceptable. Hopefully the injuries to popular players like Sidney Crosby and Marc Savard, AND a growing body of research evidence will fuel a much-needed change in both the rules and teaching of the game.

To your HEALTH and success,

P.S. Just a quick reminder that this webinar with Joe Dowdell is in a few days. If you’re interested in building a profitable fitness business, make sure you register today before all the spots are gone! The 5 Key Ingredients to Building a Successful Fitness Business & Career