Last week I broke down the skating technique of a youth hockey player. If you missed that post, you can check it out here: Analyzing the Skating Stride

The main focus on that post was on identifying on-ice technique flaws, and following up with a few basic tips on how he could try to make improvements in his most lagging areas.

As I’ve written about in the past, the reality is that players adopt sub-optimal skating patterns for two reasons:

The first point is the one most coaches are familiar with. This simply needs they need more practice and more coaching. A lot of the tips I wrote about in the last post (See: Analyzing the Skating Stride) and this one (3 Keys to Developing Optimal Skating Technique) will make a huge impact here, but it still takes time and A LOT of practice.

The latter point boils down to identifying what, if any, physical barriers the individual player has that may be limiting their ability to get into and maintain an optimal skating position.

One of the things I’ve noticed from talking to so many parents at Endeavor is that the common assumption is that kids don’t have any joint restrictions that may prevent them from achieving desirable athletic positions. It’s true that most people tend to lose range of motion with age, but it’s dangerously misguided to think teenage kids are free of these limitations. In fact, a 2013 study from Marc Philippon‘s demonstrated that 37% of PeeWee (10-12 years old) hockey players already met the minimal diagnostic threshold for Femoroacetabular Impingement (FAI or “hip impingement”), a bony adaptation that will limit skating depth. In the midget age group, 93% had FAI, with bantams falling nicely in between (63%). 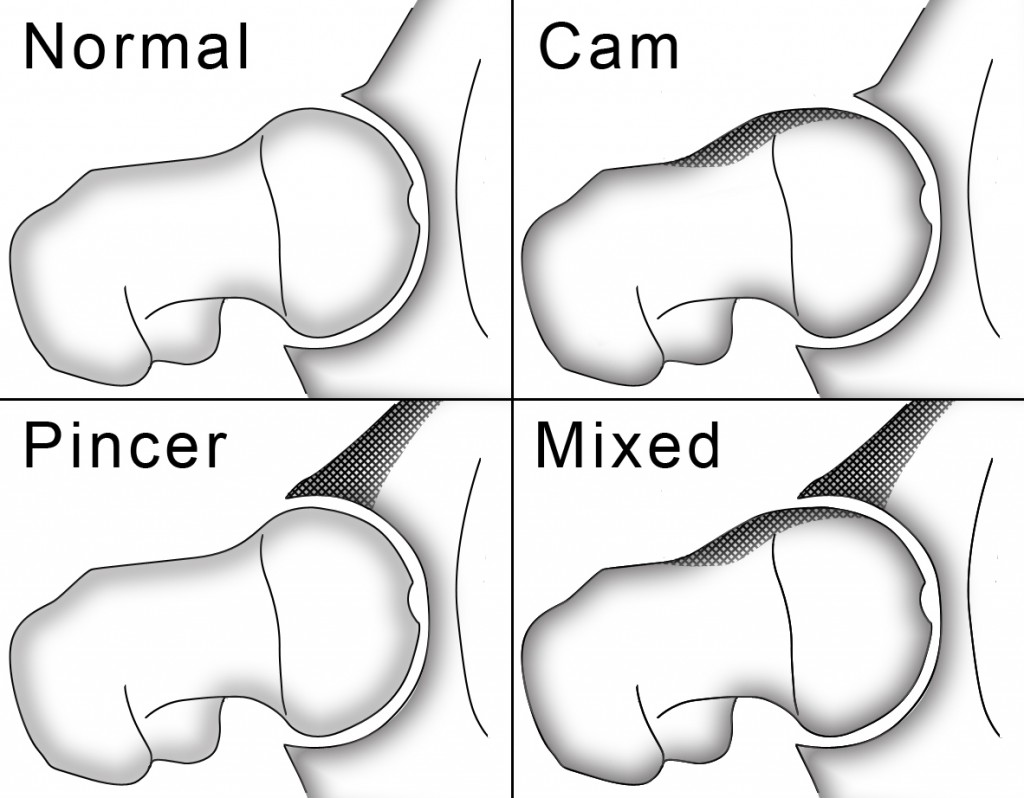 Demonstrations of the different types of FAI

Having assessed hundreds of youth athletes over the years, I can attest that there are similarly startling limitations in ankle mobility in youth athletes of both genders across all sports. A lot of athletes also really struggle with thoracic (upper spine) rotation. Sometimes this is a mobility issue and sometimes it’s simply a stability or control issue, but either way, it means the athlete can’t consistently access it.

Rotation through the upper spine is crucial for skating and shooting. …Pretty sure this shot left a solid bruise on the center of goalie’s chest.

This is doing specific exercises to address these limitations is such an important part of the training process.

Tying in breathing into the Quadruped T-Spine Rotation exercise in the video above (See 6:30) can help unlock a lot of motion and control

I could teach a whole course on how off-ice limitations influence specific skating patterns and hockey performance in general, so it’s a difficult topic to address in a short article. That said, I’d refer you to these two posts to learn more.

An old video from Endeavor…back when I was doing assessments on a shaky desk
Tying this back in to the previous post, these are all off-ice physical limitations (e.g. not skating technique issues) that could be causing his major stride faults:

A big take home from this discussion is that it’s important to have an assessment process to identify whether a player’s skating limitations are:

If you’re a training professional, keep your eyes open for an email from me later in the week as I have an awesome “Black Friday” sale coming up on my DVD Optimizing Movement.

If you’re a hockey player, parent, or coach, and interested in more information about optimal stride patterns and off-ice training strategies to maximize skating speed, check out Breakaway Hockey Speed.