As the next segment in my “Throwback Thursday” series, I wanted to repost an article discussing the bilateral deficit. This article was originally published in June of this year (2013, if you’re coming to us from the future), which doesn’t make it much of a throwback, but the last post on “Rethinking Bilateral Training” (which you can find at the link posted below) generated some questions about the topic so I thought it was appropriate to follow up with this one. Enjoy, and as always, post any questions/comments you have below!

Over the last several years, the bilateral deficit has received a lot of attention in the training world. If you’re unfamiliar with the term, the bilateral deficient (in the lower body, where the majority of this research has been conducted) simply refers to a phenomenon whereby the sum of force production from each leg individually is greater than the force production of both legs together. I covered this topic in a fair amount of detail 5 years ago in an article for StrengthCoach.com, which Coach Boyle was nice enough to let me repost on my own site here: Rethinking Bilateral Training.

Since then, there seems to be the misunderstanding that anytime an exercise is performed with one limb with a load greater than 50% of the two limb equivalent (e.g. a 180lb 1-leg stiff-legged deadlift versus a 300 lb 2-leg stiff-legged deadlift), that the explanation lies within the bilateral deficit explanation. It’s important to remember that the bilateral deficit is largely a neural phenomenon. While limitations in neural drive can certainly be a limiting factor in exercise performance, especially with fatigue or with untrained individuals, it is far from the ONLY limitation to exercise performance. Two of the more common culprits are stability and force production from other musculature.

Stability as a Limiting Factor

If you draw a rectangular box around your feet during a traditional back squat, the box represents your base of support. Naturally, a narrower stance would narrow the base of support, as would having smaller feet. During a traditional back squat, lateral stability isn’t likely to be a limiting factor to performing the exercise. Some novice lifters have trouble with anterior-posterior (front-back) stability, as the rectangle is much wider side-to-side than it is front-to-back.

In contrast, during a split squat (which I recognize is a different pattern altogether), the base of support represented by a rectangle drawn around the feet may be of comparable area to the traditional squat, but now the rectangle is much longer front-to-back and narrow side-to-side. Simply, this means that anterior-posterior stability is sound, and lateral stability is more likely to be compromised or a limiting factor in the exercise.

Lastly, during a 1-leg “pistol” squat, the base of support is only as large as the individual’s foot. In this example, anterior-posterior AND lateral stability are compromised. This significant decrease in the base of support will absolutely limit the external load the athlete can use during this exercise. If someone can back squat 400lbs and only 1-leg squat 50-100 lbs of external load, the bilateral deficit may still be in play, but the limiting factor to further loading in this exercise does not lie in a neural drive explanation, but instead in a compromised stability one. 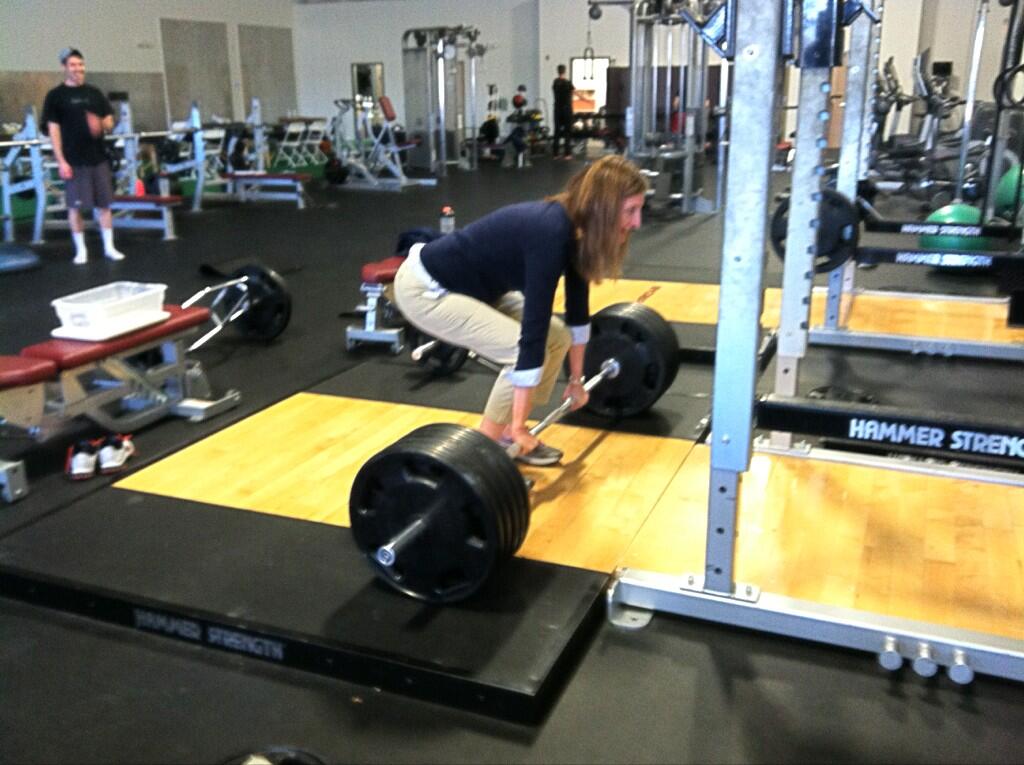 The limiting factor to Jen Poulin pulling 495 is not likely to be her base of support.

Note the considerably decreased base of support and therefore greater challenge to stability with this exercise compared to the traditional deadlift.

At this juncture, it’s worth pointing out that comparing external load to internal load across exercises is somewhat vague. One of the proposed benefits of SOME single-leg exercises is that you’re able to load the involved musculature to a greater degree using less external load compared to double-leg exercises. For example, Coach Boyle stated several years back that at a certain point for most athletes, the ability to stabilize through the core/torso during the back squat becomes the limiting factor to increasing squatting load.

Using this thought process, let’s postulate that an individual can stabilize sufficiently to squat 400 lbs, but not 405. Knowing that the core can’t maintain regional integrity and stiffness above this load, it’s logical that an athlete may be able to rear foot elevated split squat (to full depth) with 275. While the loading pattern is different, the difference between the load used in the single-leg variation is notably higher than 50% of the bilateral version because the limiting factor of core stability is removed, and the true threshold of lower body force production capacity is more closely approached. This may also provide evidence in favor of the bilateral deficit. Tying things back to the original discussion on stability as a limiting factor, at some point of loading, lateral stability in this exercise is likely to limit further external loading, but in my experience this point is still well beyond the 50% back squat load and therefore still holds merit as a progression or alternative to traditional squatting. This, of course, is in addition to the other benefits of single-leg exercises, which is beyond the scope of this discussion.

Recently, there have been a few discussions on single-leg Olympic lift variations. As with almost any exercise, I think it’s possible to develop an argument for why these variations hold merit, and how they may help improve some target athletic ability.

That said, I don’t think the differences between loads used in double-leg and single-leg O-Lift variations lies in the bilateral deficit. If an athlete has a hang clean 1-RM of 200 lbs and has optimal technique, the limiting factor to increasing loads is likely to lie in an inability to generate enough extension force/velocity to accelerate the bar upward. It’s likely that this athlete would be able to put 50% of this load (e.g. 100 lbs) on the bar, set-up in a high hang position (bar above mid-thigh) and simply shrug hard and drop beneath it to catch it. In other words, even with a damped lower body/hip component, the athlete can move 50% of the full hang clean load. This is an important point when looking at the differences between double- and single-leg Olympic lifting variations because the lower body component has been decreased, but the upper body component is the same. With any lateral stability, the athlete SHOULD be able to single-leg clean more than 50% of their double-leg load because they aren’t truly cutting their force generating musculature in half. This really highlights the importance of considering ALL of the musculature involved in a given lift.

As you can imagine, the limiting factor in a one leg clean will likely come back to lateral stability, and ability to center the bar over the support leg, which comes back to the previous discussion. As another example, a strong athlete may be able to hang snatch a 100lb DB, but not a 110 because of an upper body power limitation, which would clearly not be a limiting factor for this athlete with a 60lb DB. Despite 60lb being over 50% of the 100lb load, an athlete may be able to 1-leg 1-arm snatch a 60lb DB because the limiting factor has now changed from an upper body power limitation to potentially a lower body stability/base of support one. Ultimately, understanding the limiting factor in the performance of any given lift is key toward improving within that lift or selecting a different exercise that may provide a higher ceiling.